Erika Faith is the founder and director of Cloud Nine Yoga Schools, nationally recognized by The Yoga Alliance at the highest level since 2002.

Erika lives by trusting that miracles are waiting around every corner. She has been teaching yoga since 1995 and built Cloud Nine Yoga School in 1999, seeking to create a healing environment through a permission-based model for learning the practice of Yoga. She does this through affirmation, reflection, humor, music, poetry, and prayers. Erika inspires people to find their own source of wholeness by asking the deeper questions that bring personal insight, community awareness, and connection with the Great Spirit.

Graduating at the top of her class in 1997, Erika holds a degree in Transpersonal Psychology with emphasis on Yoga Therapy for Mental Health from Sonoma State University, California. A lifetime globe-trotter, Erika has extensively studied with spiritual teachers of mystical traditions around the world, traveling to learn all she can know about people, culture, ecology, and art. Her adventures have led her to China, Japan, Bali, India, Europe, French Polynesia, Australia, Peru, Costa Rica, and Hawaii.

1998 was a pivotal spiritual year for Erika. In this year, she received her Advanced Yoga Teacher Training and Certification from White Lotus Foundation in Santa Barbara, California. Erika also became a Karuna Reiki Master-Teacher and became an Ordained Reverend by S.H.E.S. – the organization for Spiritual Healers and Earth Stewards. Not even a year later, she began running Yoga Teacher Trainings and Retreats for her own school, Cloud Nine Yoga, first located in Redondo Beach, CA.

Erika held a full-time lecturer position in Kinesiology & Comparative Religion at California State University Fullerton from 2001-2008. During this time, she generously provided the personal attention and leadership to all her students, colleagues, and many athletes. Erika took the Bodhisattva Vow and concurrently received the Amitabha and Medicine Buddha initiations with the Dalai Lama of Tibet in 2004. Erika also assisted workshops at the Esalen Institute with Dr Lorin Roche, author of The Radiance Sutras, a poetic translation of the Vijnana Bhairava Tantra from 2011-2015. Most recently, she has consulted for and developed curriculum with various non-profits such as Breathe for Change and OG Yoga, both 501(c)(3) organizations that specialize in social justice, provide training for educators, and offer charitable Yoga classes to underserved populations.

As a Yogini and quiet activist, Erika is a tremendous balancer, space holder, and friend. She sees all conscious action as a dedication to the well-being of the planet and to all life everywhere. Her focus has always been on the transformative ability of art, music, movement, and the gathering of people to bring light into Life.

Erika is currently writing, training yoga teachers, taking watercolor lessons, dancing Hula, and holding  sacred space for spiritual practices from her home on the Garden Island of Kaua’i. She lives, loves, and laughs with her husband of 15 years, Adam, a North Shore Lifeguard and their daughter, Magic Joy, a tween comedian with a knack for hilarious impersonations.

For consultations, private sessions, and current schedule reach out: erika@cloudnineyoga.com or call: 310-989-0878 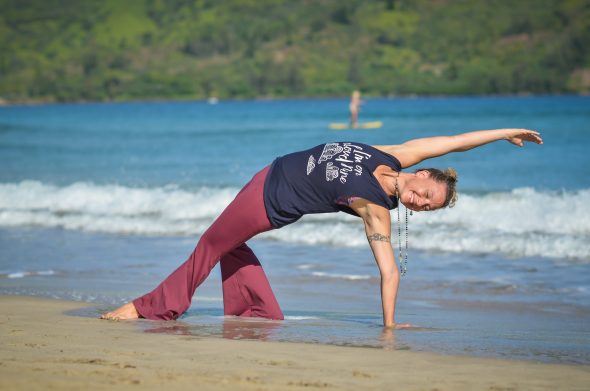